Taeppa's Tump is a women's Morris side which dances in clogs, burgundy skirts, green aprons and straw hats with an equally stylish band.
Style: North West
Website: https://www.taeppastump.co.uk/
Scroll down for more information about Taeppas Tump 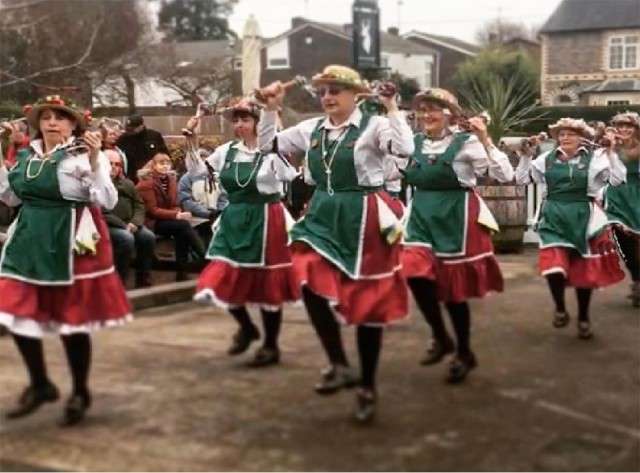 You'll be able to enjoy Taeppas Tump at this year's Swanage Folk Festival.

Events are located around the town centre, mainly Sandpit Field and Shore road. Click here for a map of the locations.

Some parts of the Festival are free and others need you to buy a ticket. Click here for more details about tickets.

The name is taken from one of the area’s outstanding archaeological sites, the burial mound of “Tæppa” a Saxon chieftain who gave his name to Taplow, which is now a very pleasant village on the outskirts of Maidenhead. The burial mound was opened at the end of the last century and yielded a collection of Saxon grave goods, which are now in the British Museum and are second only to the Sutton Hoo Burial Hoard.

They dance in the North West style which originated from Cheshire and Lancashire.